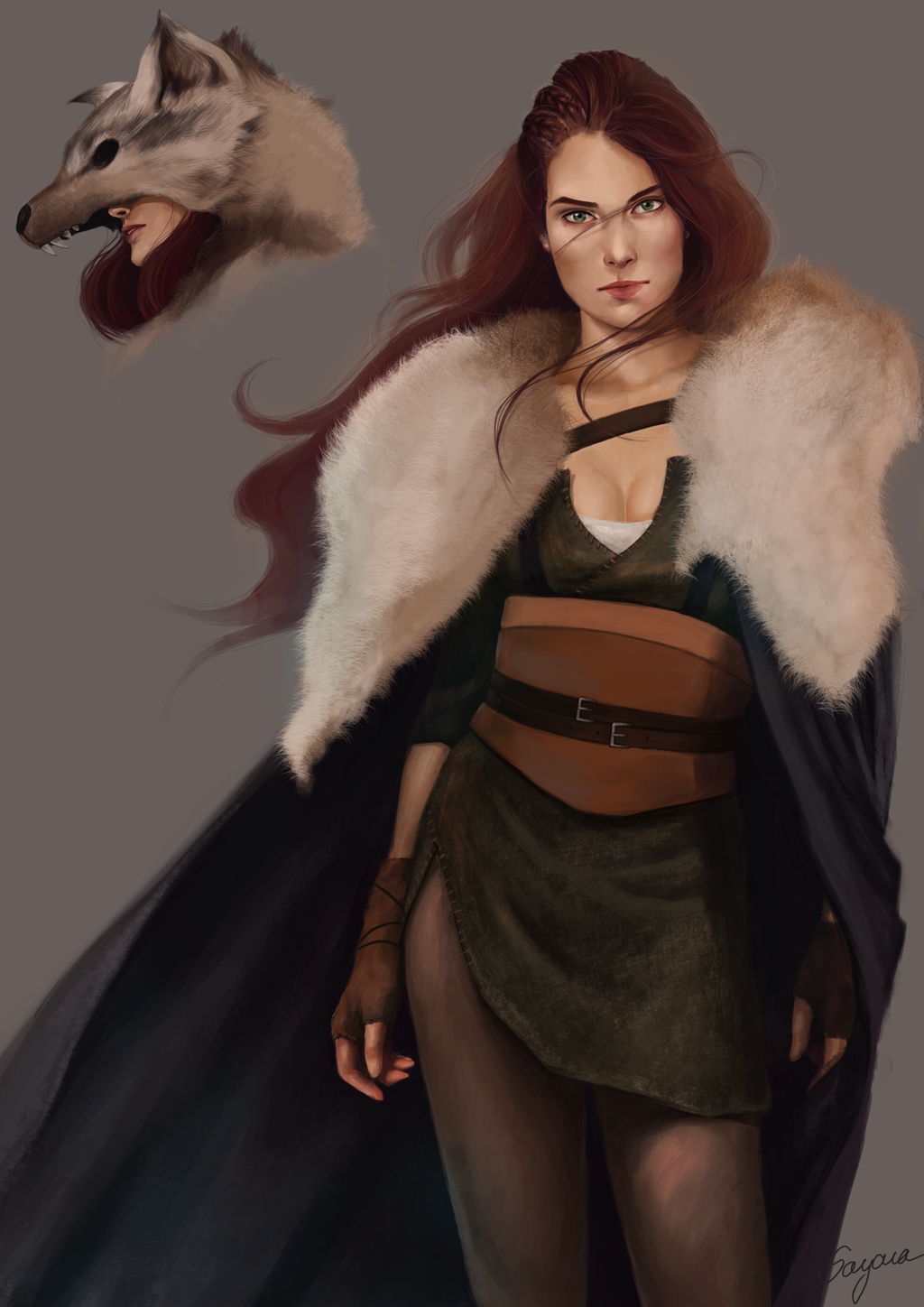 General Appearance:
Current Goal/Purpose: Live.
General Personality: Kasimira has the pride of a warrior! She does not like rival tribes, and is dreadfully prejudice. Not only against weres, but of humans outside of her tribe. She has a ranging temperment, and little patience for anything she finds beneath her. However, she is willing to sacrifice much to survive. Her sense of honor holds no parallel. She will not harm innocents, someone that cannot defend themselves, or stab someone in the back. (Figuratively or literally.) When Kasimira makes a promise, she keeps it.
General History: Kasimira was a strong warrior from a high ranking family in her tribe. Kasimira had always the utmost respect, loyalty and admiration for her tribe and what they stood for, but the new people gaining authority are making choices and decisions she disagrees with. They had begun to wage bloody war against outside Clans to increase their land, and though she had no fondness for weres or other tribes, she was outraged at the orders to slaughter even innocents and children. She voiced her opinions loudly, without wavering – only to find that her lone voice was like shouting in to a storm. The officials gave her a choice, be a part of their council, or be labeled a traitor. Kasimira chose traitor and escaped during the night.

Kasimira is now traveling in disguise, trying to get to Zantula where she can build a new life. This has been difficult, considering the life she is used to, and the prejudices she still holds.

Character’s greatest fear: Unknown
Why?
What is the worst thing that could happen to him/her? Slavery.
What single event would most throw character’s life in complete turmoil?
Why?
Character is most at ease when:
Most ill at ease when:
Depressive or SAD (Seasonal Affective Disorder)?
Priorities:
Philosophy:
How s/he feels about self: Kasimira has a high opinion of herself. She believes she is strong and wise beyond her years.
Past failure s/he would be embarrassed to have people know about:
Why?
If granted one wish, what would it be? The welfare of her tribe, despite betrayal.
Why?

Optimist or pessimist: Pessimist Why?
Introvert or extrovert: Introvert Why?
Drives and motivations: Stay alive, get revenge
Talents:
Extremely skilled at:
Extremely unskilled at:
Good characteristics:
Character flaws: Judgemental, Racist, Stubborn, Unyielding
Mannerisms:
Peculiarities:
Biggest regret:
Minor regrets:
Biggest accomplishment:
Minor accomplishments:
Character’s darkest secret:
Does anyone else know?
If yes, did character tell them?
If no, how did they find out?

One word character would use to describe self:
One paragraph description of how character would describe self:
What does character consider best physical characteristic? Strength
What does character consider worst physical characteristic? Size
Are these realistic assessments?
If not, why not?
How CHARACTER thinks others perceive him/her:
What four things would CHARACTER most like to change about self? (#1 most
important, #2 second most important, etc.)
1.
2.
3.
4.
Why?
If change #1 was made, would character be as happy as s/he thinks?
If not, why not?

Immediate goals: Stay alive and make some money.
Long range goals: Return to Stanislava and remove those in charge. Revenge.
How does character plan to accomplish goals? With money.
How will other people around character be affected?

A. If your character were to die this evening with no opportunity to communicate with anyone, what would they most regret not having told someone? Why haven’t they told them yet?
— Kasimira wants to clear her name of being labeled a traitor and wants all of her tribe to know who is REALLY going against the tribe’s best interests.

B. Would your character accept $1,000,000 to leave the country and never set foot in it again?
— Kasimira would struggle with the desicion. At the moment she is unwanted at her tribe and has no reason to go back. If she could solve the problems there, she wouldn’t have left.

C. Your character is given the power to kill people simply by thinking of their deaths and twice repeating the word “good-bye.” People would die a natural death and no one would suspect them. Are there any situations in which they would use this power? [If they can imagine themselves killing someone indirectly, could they still see doing it if they had to look into the person’s eyes and stab the person to death? Have they ever genuinely wanted to kill someone or wished them dead?]
— Kasimira would do it in a heartbeat. She’d be more than happy to use it on any sort of person judged as dangerous. She wouldn’t feel any sort of remorse or regret in taking their life.

D. What would constitute a “perfect” evening for your character?
— Safe and sound somewhere warm after a good dinner and enjoying pleasant company. Sometimes you realize that you really miss or desire the little things when it seems they are no longer available!

E. Would your character rather be extremely successful professionally and have a tolerable yet unexciting private life, or have an extremely happy private life and only a tolerable and uninspiring professional life? [Since so many people place great emphasis on a happy private life, why do people often wind up putting more energy into their professional lives? If you feel that their private life is more important to your character, do their priorities support this? Are they simply unwilling to admit that work is more important? Do they use work as a substitute? Do they hope professional success will somehow magically lead to personal happiness?]
— Kasimira lived for the good of her tribe and put forth all her time and effort to keeping it safe and under control. (Fighting in conflicts, both physically and politically!)

F. If your character could wake up tomorrow having gained any one ability or quality, what would it be?
—

G. Your character has the chance to meet someone with whom they can have the most satisfying love imaginable – the stuff of dreams. Sadly, they know that in six months the person will die. Knowing that pain that would follow, would they still want to meet that person and fall in love? What if they knew their lover would not die, but instead would betray them? [In love, is intensity or permanence more important to them? How much do they expect from someone who loves them? What would make them feel betrayed by their mate – indifference? Dishonesty? Infidelity?
— If Kasimira knew the future and could choose, she wouldn’t want to have a great love only to lose it. Kasimira would NEVER allow a betrayal. Sheprefers stable commitment and expects to recieve it. What she considered a betrayel would depend heavily on the situation.

H. Does your character prefer being around men or women? Do their closest friends tend to be men or women?
— Kasimira is more comfortable in dealing with men. She finds that women are more often to toy and play games, not saying what they mean to say.

I. Would your character be willing to murder an innocent person if it would end hunger in the world? [Would it torment them more to have the blood of an innocent person on their hands or to know they let millions of people die? What do they think of people who achieve great things by compromising their principles? Many are will to give their own lives but not to take the life of another; is anything so important they would sacrifice their very soul for it?]

J. What is their most treasured memory?

K. If your character knew there would be a nuclear war in one week, what would they do?

L. What is the greatest accomplishment of your character’s life? Is there anything they hope to do that is even better?

M. One would be the one material item your character would save during a fire?

N. Your character is offered $1,000,000 for the following act: before them are ten pistols – only one of which is loaded. They must pick up one of the pistols, point it at their forehead, and pull the trigger. If they can walk away they do so a millionaire. Would they accept the risk?

O. If your character could choose the manner of their death, what would it be? [Would they die a hero’s death, die a martyr to some great cause, die in a natural catastrophe, or die peacefully? Why is it so tempting to have death catch us in our sleep?]

P. For what in your character’s life do they feel most grateful?

Q. How forgiving is your character?

R. When your character tells a story, do they often exaggerate or embellish it? If so, why?

S. How much does your character feel in control of the course of their life?

T. Is it easy for your character to ask for help when they need it? Will they ask for help?

U. Would your character like to be famous? In what way?

V. What are your character’s most compulsive habits? Do they regularly struggle to break those habits?

W. What does your character strive for most in their life: accomplishment, security, love, power, excitement, knowledge, or something else?

X. How easily embarrassed is your character?

Y. Does the fact that your character has never done something before increase or decrease its appeal to them?

Z. How many different sexual partners has your character had in their life? Would they prefer to have had more or fewer?