– Daughter is Victoria. She calls her Tori.
– Has a tramp stamp tattoo of her boyfriend’s nickname “Tomcat”.
– Real last name is Kearney

Grew up in an apartment complex in Columbus Georgia. Got preggo at 16 with her 19 year old badboy boyfriend Thomas Serrano. Parents kicked her out because a knocked up 16 year old made the look bad with all their conservative Christian friends. She moved in with Tom and his buddies in a crappy trailer and dropped out of school. Stuff was okay at first but not great, then went downhill real fast after baby Victoria was born.

Tom ran with the wrong kind of people, got in to stealing and selling pills and other drugs. Shady people were always coming in and out of the place. Lorelai did a lot of crappy things to try and keep him happy and not taking out frustrations about a howling baby and expenses. He eventually got busted for drugs possession and assault of an officer and went to jail for 3 years.

During that time frame Lorelai got a job and took classes to get her GED. Things were starting to look pretty good. Then Tom got out of jail and moved back in. For awhile she was supporting him and thought things were better cause he was sober and trying. …but turns out he was freeloading and fell back in to old habits. Drinking, drugs, stealing, being a huge asshole. Lorelai didn’t want things to go like they did the first time, and she’d try to argue it but that resulting in him getting even more toxic and abusive.

This lasted for about two years and reached a climax when Tom hit Tori. Lorelai flipped out and for the first time actually [i]fought[/i] him. The scuffle ended up with him out cold on the floor with a big gash across his face. Lorelai has NO idea how it got to that, she mama-rage blacked out. It could’ve been the broken window, the busted TV, her bloody ring, the glass all over the trailer, anything! She thought she killed him. She took Tori, their stuff, and all of Tom’s money and RAN.

They were living in a new trailer in a new city the first time he found them. She was glad to know he wasn’t dead, but he was PISSED OFF. Pissed about the scar on his face, his money, her running and his stolen kid. Too pissed to talk and the scuffle ended up with Lorelai and Tori abandoning everything and running again.

The second time he found them he got wise and changed his approach. Instead of being outwardly violent, he smiled and threatened. He told Lorelai that if they didn’t leave with him, he was going to tell the cops to arrest her for attempted murder and the kidnapping of his kid. He even flashed some cash and a lawyer’s name to back it up. She believed him – but wasn’t going to let him take Tori. So the first opportunity she saw, she ran again.

Lorelai and Tori have been living in Chicago for the past year and a half without a sudden move. Lorelai found the big city was a good place to get lost in and is now feeling safe enough to get them a REAL apartment instead of living in motels and out of cars. Tori is super excited about getting her own room. It’s nice because her mom’s new job is across the street in a German Diner, and her middle school is right down the street at walking distance. Lorelai even sold their car so they could get furniture. Lorelai has just started evening business classes so she can create her own online startup business. Custom designed plushies! She’d make them all the time for Tori out of old clothes cause she couldn’t afford a lot of toys, and is now putting that skill set to use. 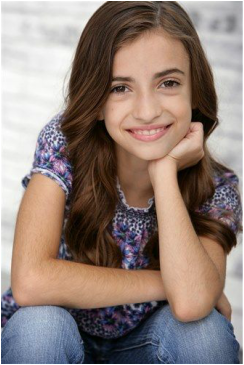