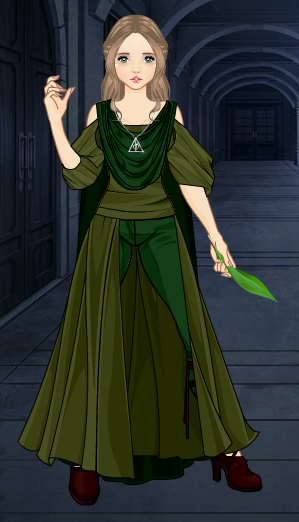 Character Name: Norin Anaya
Gender: Female
Class: Priestess
Strong Points: Determination. No matter how frightened she is or how impossible something might seem, Norin makes every effort to accomplish her goal. Norin has a gift with healing; being able to create remedies from natural ingredients (plants, minerals, ect), and has a soothing touch.
Weak Points: Norin suffers from an illness that is slowly taking the strength out of her body. On a good day it’s unnoticeable, but on a bad day she might be faint, exhausted, or unable to keep herself awake. When she experiments with potential cures, she often has to deal with bad side effects until they pass.
Abilities/Traits: Sewing, mending, cooking, animal training. Normal things for a Priestess.
General Appearance: Petite and tiny at 5’2″, she could easily be picked up and thrown! Her body is very thin with pale skin, due to the nature of her illness.(Her healthy skin tone would be more olivy-peach. Maybe a Mediterranean look.) The only thing marring her skin is a tattoo of ivy vines on her lower back – something that is traditional for the priestess in her order. Norin’s hair is long, silver-grey. Soft green eyes. Norin looks like the perfect little princess! Traditional dress consists of dark grey robes that are backless to display the markings of a priestess. She often wears a heavy cloak to shield herself from the effects of the sun.

General Personality: Kind, gentle, compassionate, shy. Norin is the picture perfect priestess of her order. She has limitless care and patience for other human beings (and animals!), and displays her affection openly. She has spent her entire life with only women, so she tends to be shy and speechless when in the presence of men. She isn’t quite sure how to talk to them. Her life has been so simple and uneventful, that suddenly being out in the “real” world often seems overwhelming and frightening. Despite being scared, she always makes the effort to be as brave and reliable as possible.

Quest/Purpose: Norin is seeking a cure for the disease that is plaguing the village she is from. This is double difficult, as she too is now showing the signs of the disease.

History: Norin was an orphaned baby found in the swamp of the nearby village. The Priestess of the Temple took her in and raised her as one of their own. She has grown up, always being on of the Priestesses of the Order.

A few years ago, an illness cropped up in the local village first amongst the really old or very young. Soon it became a village wide epidemic. Despite efforts to heal the sick, once the disease took hold of a person, they slowly became more weak until they finally died. The disease hasn’t (yet) spread beyond the village, but no cure or cause can seem to be found. At it’s going rate, by the next year all in the village would die.

Something had to be done to save the people, Norin too it upon herself to leave the village and seek out information for a cure. Most of the Priestesses were either too old or too sick to set out, nor could any of the villagers leave their poor families. This task she has taken on with determination. Not long after leaving, Norin found herself showing signs of the illness. It was then doubly important to find a cure, if only because no one else would be able to do it.

Norin has since been traveling as quickly as she can, searching out natural cures, healing methods, or even just some small piece of information than can give a clue to her village’s plight. She tests a lot of these cures on herself to see if they are worthy to bring back, often at the cost of her own health.

NESHIM
The Neshim are a nomadic swamp people (human), living in the Swampland Region. They travel and live in on-the-water boat houses. Harvesting swamp plants and fishing for their main source of food and income. Neshim have a tribal sort of governing system, allowing families to care for themselves and only coming together for big decisions when an issue affects them as a people. Their body frames tend to be small, with fair to olive complexions. Neshim are excellent swimmers and take well to the water. Some Neshim may reside in small tribes on solid banks, but always directly near water.

Raisel
A goddess of nature, most specifically towards plant life. Most commonly worshiped in cultures/locations where nature and natural resources are important. There is a legend about Raisel choosing to live amongst mankind in the form of blossoming ivy because she wanted to be close to those she guides. Thus the Priestesses of Raisel use Ivy as their official symbols.