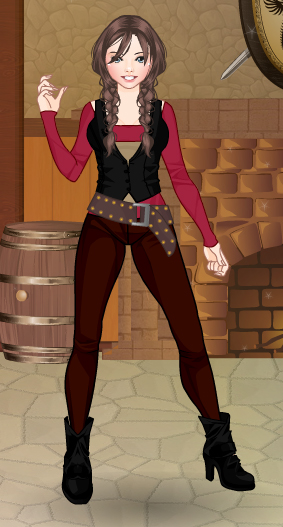 General Appearance: 5’2″ with a small but solid frame. She is obviously female with tell-tale curves and a moderate bust-size. Her facial features are misleadingly young with fair skin and a heart-shaped face. Brown hair with no fancy coloring or cut. She favors having it braided or pulled in to a pony tail out of her face. Light blue eyes. Wren prefers wearing practical clothing like pants and vests. Nothing with a lot of billowy fabric, just in case she needs to move around or make a quick dash. She doesn’t like cloaks for this same reason, choose to wear a knee length coat instead.
Strengths: Quick and springy, she’s also got a good deal of endurance.
Weaknesses: Not brute-strength strong, and susceptible to illness like colds, flu, etc. Especially in a foreign land!

Current Goal/Purpose: Explore the Forbidden Continent!
Talents: Fencing, Checkers, Drawing/Painting, and being in the wrong place at the right time.
Inabilities: Deciphering thick accents, Being Serious. (Being serious is a bit awkward and uncomfortable. Better to crack jokes and pretend like things isn’t a big deal!)
Fears: Fears! HA! You can’t have adventure if you’re afraid of things! Honestly? Demons are EVIL bastards, thank the gods there aren’t any of them around here! She’s also a teensy bit afraid of the dark. But only when it’s pitch black dark. She’s only human after all, so if she can’t see it freaks her out.
General Personality: Bold, brave, adventurous! Back where she came from, someone that dared to travel around the world to see all of these new sights was someone to be admired. Wren faced dangers head on, never ran from a fight (that she knew she could win!) and always got involved. She loves people, learning things, and trying things for herself. Humans find her a little unconventional and eccentric, but she’s no more crazy than any other person. On Deridia… well. That remains to be seen!
Inner Personality: Being a 7th Daughter with no expectations placed on her, it’s been a bit hard on her ego. As a throw away heir, no one really needed or wanted her for anything. Toss in being one of MANY daughters, by the time she came of age, everyone was pretty exasperated in dealing with the other sisters! Wren seeks out adventure and new lands, because she’s still looking for her own place in the world. Somewhere to belong and feel as if she has purpose!
Secret: Wren isn’t really going to announce that she’s a 7th princess. Why bother, really? It’s pretty much just a fluff title! …Unless it’s going to save her life or get her out of trouble. Then it might be useful!

General History:
Born as a 7th daughter, Wren was able to live a comfy existence without having to worry about being responsible! So once she was done with all that boring schooling, she was free to choose her own destiny. Her desires? Discovery and Adventure! She’s been to many countries, seeing different sights, rescuing damsels, saving princes, fighting witches, and it’s all been amazing.

Then she heard about The Forbidden Continent. A land where animals lived like humans, talked, had societies. This sounded like THE adventure of a lifetime! Wren had to go there! So she packed up her trunk and started her voyage.

Elizabeth Patrizia Delphine, Fifth Princess: Unhappy and unpleasant marriage of convenience. Is supposed to be making babies with the husband, and it’s not working out.

Josephine Sarika Fleur, Sixth Princess: Has been engaged for nearly five years, and something always puts off the wedding. Presently, her fiance is missing.