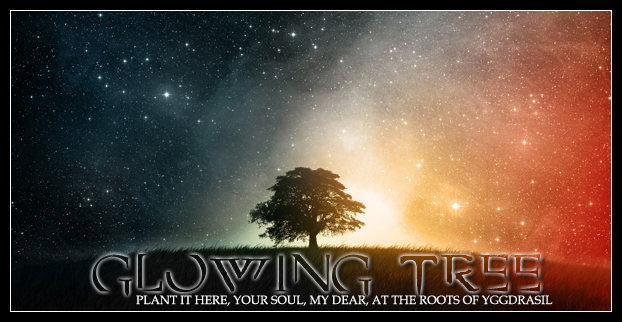 Plant it here,
your soul,
my dear,
at the roots of Yggdrasil

Seek it out,
with your hands,
and shout!
at the base of Yggdrasil

Eternal life,
no pain,
no strife,
climbing the trunk of Yggdrasil

Reach the top,
but beware,
of the drop,
you stand in the branches of Yggdrasil

It’s now all yours,
the fruits
of your labors,
enjoy the shade of Yggdrasil.

Once Feldagard was a land of prosperity and beauty. Rolling plains, deep forests, ice capped mountains. Kingdoms containing rich cultures and long history ruled the continents. But no great kingdom can last forever. Jealousy and greed became the starting points of war. Countries at peace turned against each other. Tools that once made the world a better place became weapons. In the end, what Feldagard’s heroes thought would save the world became it’s doom.

A hundred years later, Feldagard is barely crawling out of it’s Neo Stone Age. The Kingdoms of Old are gone, nothing but ruins and forgotten history. New clans and tribes have popped up, trying to scrape by a living in small areas safe from the beasts that now roam the world.

Yet, hope is not entirely lost. Not all history destroyed. Pulled from the hands of an Elven Knight’s bones is a book. Within it’s pages are the stories of Feldagard’s beginnings. How the world was made and filled with life. Most particularly of Yggdrasil, the World Tee. Where within it’s leaves is the power to shape the world.

THE QUEST
A questing party has pulled together under the command of a woman known only as Zahra. In her possession is this fabled book, and with it she has deciphered what she claims to be a map to Yggdrasil. Her dream is to ask the Glowing Tree to restore the lands of Feldagard and take back the monsters that have been ravaging the world since the End War.

Yet, the questing party are not the only ones in search of this legendary glowing tree. Evil is afoot, with a desire to claim the one power that can change the shape of the world.

ABOUT FELDAGARD
First imagine your typical rich fantasy world with all of it’s amazing races, magics and locations. Then imagine magical warfare so devastating that the landscape looked like it was hit by bombs, and now demons or other monsters are lurking in every shadow. Feldagard suffered it’s fate at the hands of conceited Mages who could not admit their limits or when they were wrong. Being hundreds of years after the End War, the landscape is healing, but the cultures of people are not quite there yet. A races usually remain in small scattered villages. There’s rarely travel across the world, as the monsters are fearsome. A lot of craft and skill has been lost, so finding anyone with an advanced talent in -anything- is very difficult to come by. Villages that are close to each other often have to deal with waning resources or fussing with each other who controls them.