The Other Side of Time 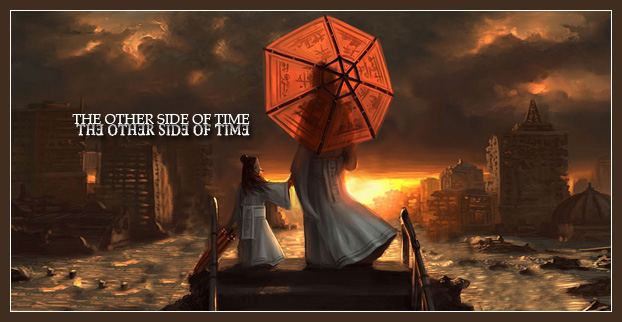 Aratamete is a grand kingdom. Known all across the world for it’s vibrant and colorful culture. Their artwork inspires, their music delights. The kingdom has flourished under the rule of a noble royal family. For hundreds of years, Aratamete has reigned as the most powerful kingdom, backed by it’s school of trained Ninja. People from every country have sent their warriors to Aratamete so that they may come back trained in the fighting arts.

Yet, something has changed. One day Aratamete was not the grandest kingdom of the world. It’s noble line had been dead for centuries. There was no school of Ninja. No beautiful culture. The kingdom was dead and as a consequence the entire world was in shambles.

Only a small few know what happened. They seem to be the only ones in the world who remember how things were [i]supposed[/i] to be. Using Ancient Magic, they must go backwards in time. To the point where things were altered and fix what was broken. …and they only have a small window of opportunity before this reality becomes the ONLY reality!

[size=4][color=orangered]THE JOURNEY[/color][/size]
5 people with memories of what the world SHOULD be like have now traveled 500 years in to the past. They know that something happened during that period which changed the real history of Aratamete and the world. For now, both realities exist. If they fix what was altered, they can return Aratemete back to what it is meant to be. If they don’t… they will be stuck. Their reality will be gone and the future will be dismal.

The group have arrived during Aratamete’s first Dynasty. The first of nobles kings is a young teenager having just inherited his reign. In his father’s honor he has erected a school for training Ninja Warriors. He will soon meet his future wife, his adviser and others that would help shape Aratamete in to the grand kingdom it will be. The group MUST make sure all of these events happen as they should!

[size=4][color=orangered]JOINING[/color][/size]
I have a small list of positions that must be filled! Note that people native to Aratamete must reflect Asian culture as it is an Asian style country. However, characters can also be from other countries. The claimable positions are first-bio, first serve. So you can claim a spot, but if someone else posts a bio first you’re out of luck. :D Finish those bios quickly. Once the 5 time traveler spots are filled, all new characters must be from the current time. [i]I’m closing the applications at [u]15 characters[/u]!

[color=coral][b]The King’s Mother:[/b][/color] Married to the previous King in an arranged marriage to join two countries, she is the current acting ruler until her son comes of age. She is protective of her son and all kinds of meddlesome in his life!